Portrait of a fascinating city in the North Caribbean

A territory nestled between sea and mountains

Located on the north-Caribbean coast of Martinique, the city of Saint-Pierre extends its 3,872 ha amphitheater facing the bay overlooking the Caribbean Sea. The trade winds blowing from the Northeast and the depth of its waters make it easily accessible to ships. The green setting consisting of a majestic cliff delimits the territory to the East and shelters the city of winds blowing to the West. This plant alignment continues to the North and dissolves in a dominant mass that culminates at nearly 1400m in height, Mount Pelee. Hurtling down the slopes of Mount Pelee, the Fathers River, the Blanche River, the Dry River, the Claire River and the Roxelane River shape the valleys, cross the territory and irrigate the city. The major eruption of 1902 reshaped the landscape and changed the relief of Mount Pelee. The reconstruction of the city is to the detriment of part of the agricultural land located on the slopes of the massif. While the slopes of the Mountain are mainly occupied by agricultural areas and afforestation, the urban fabric develops mainly on the coastal fringe. The city of Saint-Pierre now has 4,177 inhabitants (INSEE, 2018). 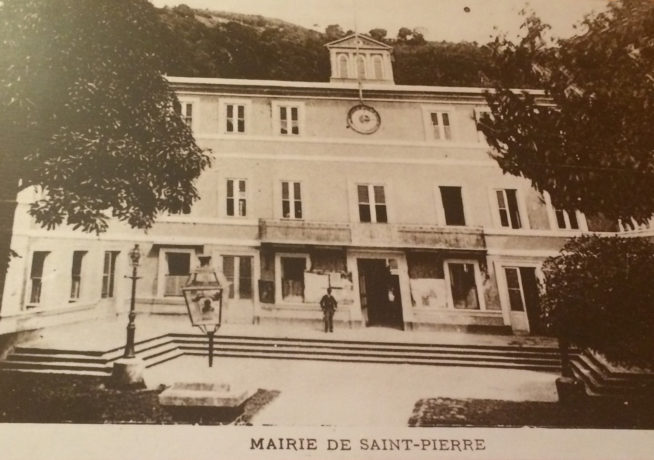 In 1855, archaeological discoveries on the territory make it possible to attest to the presence of the Amerindian populations, the Arawaks and the Caribbean, on the scale of the three districts of Saint-Pierre. However, they are very insignificant because of the small plots excavated and make it difficult to realize the organization of the space. The newspaper of the time, La France d'Outre-mer, reports that it is essentially a few fragments of pottery and various utensils that are located in the pre-Columbian period. The hypotheses of first occupations were confirmed by excavation campaigns conducted from 1988 onwards. These excavations which – aimed to reveal the remains of a colonial city at the end of the nineteenth century) – made it possible to discover furniture (objects of art and daily use).

On September 15, 1635, an expedition led by Pierre Belain d'Esnambuc, governor of the island of Saint-Christophe, landed at the mouth of the Roxelane River. He took possession of Martinique in the name of King Louis XIII. The new colony was organized around Fort Saint-Pierre. The fort gives its name to the village which then becomes the first district of the city, bounded by the River of the Fathers, to the north, and by the River Roxelane, to the south. The Place d'Armes, the Military Hospital, the King's Stores and the Governor's House were established there. A first church, made of wood, was built by the Jesuits in 1635.

The eighteenth century marks a major turning point in the evolution of the city due to the conjunction of a natural advantage and an economic factor. The bay of Saint-Pierre, ideally deep thanks to its plateau, is conducive to the anchoring of boats. Commercial activities related to sugar production are at the origin of the development of the port. The concessions granted to the inhabitants relating to the flourishing port activity led to the development of an additional village south of the harbour: the Mouillage district. A second parish, on the initiative of the Dominican friars, was erected there. 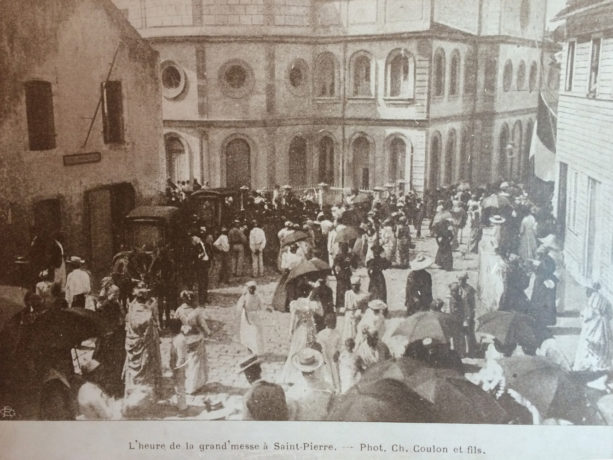 The sugar house, where sugar and then rum occurs, is the starting point of this economic and commercial life. This is the beginning of slavery and triangular trade. The city became a major stage in the trajectory of slave traders where the servile "merchandise" was landed and then sold on the slave market.

At the end of the eighteenth century, the borders of the city of Saint-Pierre were definitively fixed. The territory is structured in three districts from North to South: the Fort district, the Centre and the Mouillage. In the North, the construction of residences decorated with gardens in the "New City" gives the Fort district the function of a residential area, as opposed to the Mouillage district characterized by the hustle and bustle of port activity. The Centre has both an administrative and cultural vocation; the Intendance, the prison and the Theatre are concentrated there. The city echoes the events of the metropolis by being the scene of major social and political facts in the history of Martinique. There was the scandal triggered by the wearing of the tricolor cockade at the Grand Théâtre de Saint-Pierre on the threshold of the French Revolution; then the bloody slave revolt of May 22, which began the day before the official proclamation of the abolition of slavery on May 23, 1848.

Once declared free on May 23, 1848, the former slaves fled their former homes en masse. Resorting to a new foreign workforce presents itself to landowners as an economic alternative to the predicted decline of the sugar economy. It was then planned to call on Indian workers since there were five French counters in India. Thus, on May 6, 1853, 314 Indian indentured labourers from South India landed on the Place des Mosges in Saint-Pierre. From 1853 to 1883, when Indian immigration ended, 25,509 indentured labourers of Indian origin arrived in Martinique.

At the end of the nineteenth century, Saint-Pierre was nicknamed "the little Paris of the West Indies" as the city was bubbling economically and culturally. Due to its geographical location, it is resolutely open to the outside. Saint-Pierre is the first merchant port of Martinique. This modern city is equipped with avant-garde equipment improving the quality of life of the Pierrotins with the ingenious system of pipes, its electrical network, its horse-drawn tramway linking the District of Mouillage to Fond Coré in the north of the city. Its demographic expansion is also important: Saint-Pierre is the most populated municipality on the island. In 1901, the city had 26,261 mainly urban inhabitants divided between the village and its periphery. 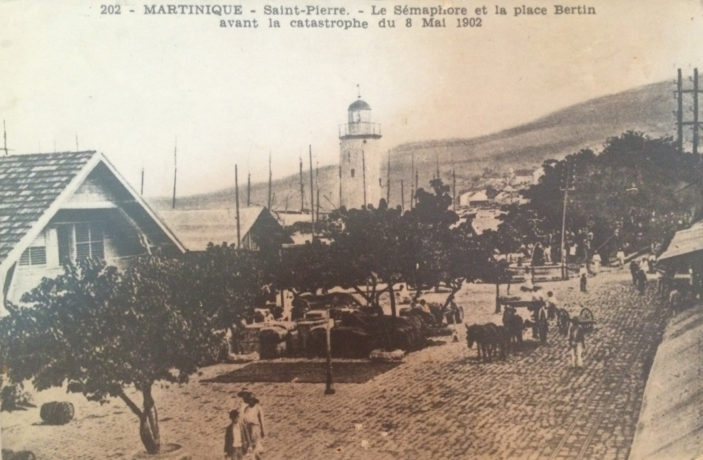 The Pierrotin lifestyle is nevertheless disturbed by the increasingly disturbing manifestations of Mount Pelee which dominates the city. Fumaroles, earthquakes, rumblings and continuous ash rains disturb the peaceful daily life of the population. On May 5, 1902, a lahar, caused by the discharge of the crater lake into the Blanche River, swept away the Guérin factory located at its mouth. At the request of the governor, a "scientific commission" was set up on May 7 to study the volcano. The latter draws an unfounded conclusion and states that the latter would not present any more danger than Vesuvius presents in Naples. This was in fact a final attempt to reassure the population and limit departures on the eve of the second round of the general elections scheduled for 11 May 1902. On Thursday, May 8, 1902, at 7:50 a.m., while the churches of the city were filled with faithful, a fiery cloud spewed by Mount Pelee set the whole city ablaze. In just a few minutes, the centuries-old Little Paris of the West Indies disappears, consumed by ash and volcanic rocks. An incredible scene of a devastated city is offered to haggard witnesses. The prosperous capital is transformed into a vast field littered with charred bodies covered by ashes and ruins. The governor and his wife, who had arrived the day before to take part in the ceremonies, also perished. In the harbor of St. Peter's, several ships sink into the deep waters of the Caribbean Sea, set on fire by the incandescent ashes. Only two bruised men survived the tragedy: Louis Cyparis and Léon Compère.

On March 23, 1923, Saint-Pierre, until then attached to the commune of Le Carbet, was again erected as a commune. A new municipal council is appointed to the governance of the City; at its head, Louis Ernoult, the only survivor of the former Municipality. The new mayor affirms his desire to revive the city. From then on, important works were undertaken for the reconstruction of the former Notre-Dame-de-l'Assomption cathedral, the administrative and economic buildings (the town hall in 1934 and the Mouillage market). However, the memory of the eruption is not ruled out. It enters the walls of a new establishment dedicated to the disaster, in 1933: the volcanological and historical museum named after the American volcanologist and geologist, Frank A. Perret. At the end of the 1980s, archaeological excavation campaigns were carried out on the territory as part of development projects supported by the Municipality. Obtaining the City of Art and History label in 1990, renewed in 2003 and then in 2018, carries projects to enhance and safeguard sites and monuments that now have significant historical and heritage value. 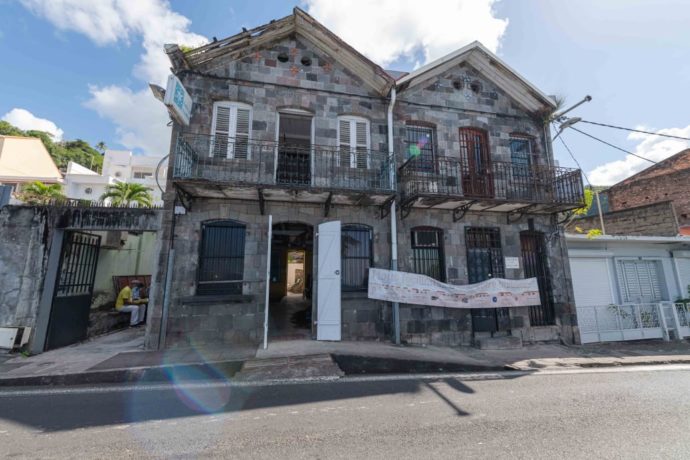 A precious cultural instrument of proximity, the CIAP aims to raise awareness, inform and train fellow citizens in the architecture and heritage of the territory of Saint-Pierre. With a centre for historical and scientific information and documentation, the CIAP is open to teachers, researchers and the general public. Starting point for guided tours, the CIAP of Saint-Pierre will be a privileged space for meetings and didactic and pedagogical exchanges. A permanent exhibition, temporary exhibitions, educational workshops, conferences… will make it possible to popularize the architectural, urban and landscape knowledge of the city.

The Memorial of the 1902 disaster  here

From the volcanological museum to the memorial of the 1902 disaster Upon his arrival Frank A. Perret sees the interest that a volcanological museum can bring to Martinique. Following in the footsteps of Professor Lacroix's work, he wishes to continue the study of Mount Pelee and its eruptions, capital for the advancement of volcanological science. He appealed to private donors for the funds and to the city of Saint-Pierre for the land. In 1933, the first museum on the island opened its doors with an exhibition that, in addition to the remains of the disaster, gave an important place to volcanology. The building forms a simple rectangular volume in painted concrete and Art Deco inspiration. It was renovated in 1969 in a modernist architecture inspired by the International Style. 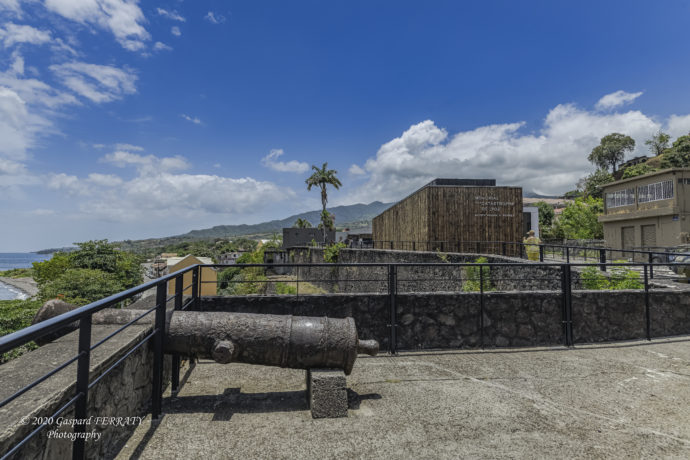 The name "Frank A. Perret" is then inscribed in forged letters on the façade. A new visit device frees up a large area in the center of a unique room to accommodate large groups of visitors at a time when mass tourism is developing in Martinique. The interior of the museum was renovated in 1988 when the city of Saint-Pierre was awarded the Label Ville d'art et d'histoire and then obtained the name Musée de France in 2004. In December 2018 it underwent a complete renovation as part of a public service delegation allocated to the Clément Foundation. The name "Memorial of the disaster of 1902" is added to the historical name of the founder of the museum to mark the new direction with a more cultural approach to the disaster that highlights the experience lived by Martiniquans and its global impact.   A new architectural project, contemporary architecture With a contemporary architectural party assumed, the renovation project testifies to a new stage in the life of the institution. His goal is to install the museum in the city, powerful and sober in relation to its function as a memorial. The objective of reopening to the public on May 8, 2019 after only five months of closure required, without any aesthetic criteria, the use of materials that are simple to implement and short supply chains. The choice of wood to cover the facades to replace the damaged stone laid during the renovation of 1969 was immediately obvious. Easy material to supply, it was burned according to the ancestral Japanese technique of shu sugi ban which makes the wood more resistant to the elements and here echoes history. The esplanade and its promenade have been renovated using a simple deactivated concrete whose aggregates come from the slopes of Mount Pelee in Saint-Pierre and the fountain put back into service. The simple and elegant volume of 1969 has been preserved. A gallery was simply placed on the old access ramp to facilitate circulation in the museum space. The Art Deco-inspired museum when it was built in 1933, became modern in 1969. Today, the building designed by the architect Olivier Compère is resolutely contemporary, with pure lines and forms, a beautiful black clothing that varies according to the hours of the day, a palette of raw and simple materials that resonates and leaves politeness to its vocation as a place of memory.